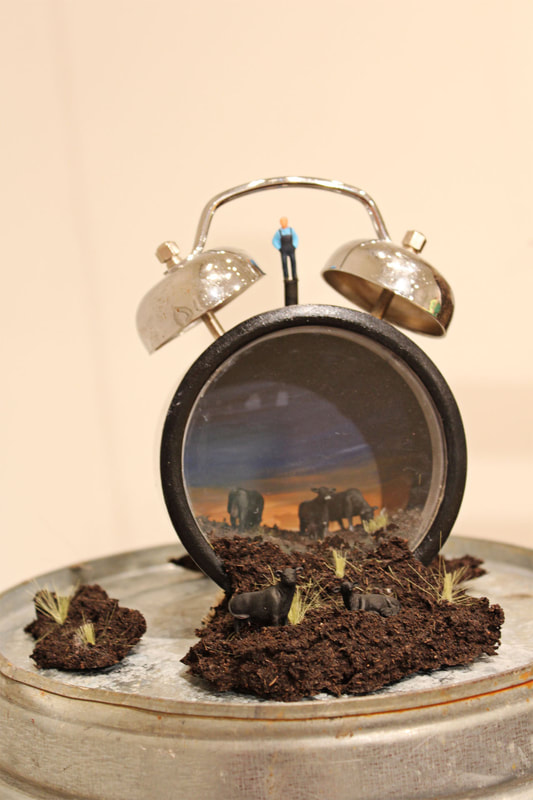 Stacey Rathert
24/7/365
2015
Found objects, dirt, adhesive
Work Statement: An alarm clock is typically used to signal the beginning of the day and document the passing of time as the night grows near. Being raised on a farm I learned early on that the day doesn't always coincide with the hours displayed on the clock, rather the day is determined by the rising and setting of the sun and may extend well into the darkness of night or start in the wee hours of the morning. A farmer's work is never done and this piece highlights the hours spent working cattle.

This piece has even more personal meaning beyond a celebration of work ethic, as the farmer atop the clock depicts my late grandfather and the removal of the actual parts of a functioning clock represent time lost. My grandfather was a hard working man who put in his share of long hours on the farm. But my time to learn from him was cut short, not because he passed away when I was particularly young, but because he had Alzheimer's. This piece honors the memories I do have of him, both happy and sad.
Artist Bio: Stacey Rathert is an artist originally from the way outs of Kansas, also known as the small farming community of Lancaster. Rathert received her Bachelor of Fine Arts and Bachelor of Science in Education in 2011 from Fort Hays State University, Hays, Kansas. She then made an epic Uhaul voyage to the south to receive her Master of Fine Arts from the University of Mississippi, Oxford, in 2015. Currently Rathert is a Visiting Assistant Professor at the University of Mississippi in the sculpture and foundations departments.

Despite her short stature, she is a teller of taaall tales. Working in a variety of scale, Rathert creates artwork that tells exaggerated and fantastical stories centered on themes of personal identity. She uses simple, whimsical imagery to illustrate her narratives, elevating the mundane through alteration. Typically this results in humorous contradictions of material, functionality, or commonly associated characteristics. Relating to the performance of exhaustive story telling, she is most drawn to materials that require meticulous methods to transform, such as cast metals, smithed and fabricated steel, fabric and fibers, and found objects.

Outside of her academic and artistic endeavors Rathert enjoys a good, medium rare KC Strip with a side of carbs, adding to her collection of over 100 antique and toy sad irons, knitting and sewing, cooking and baking, but not doing the dishes, bowling, hikes with her cattle dog Mabel, escapes to the farm to drive tractors, restoring her 1971 International Scout, taking the long way home, and moving heavy stuff, over and over again.
Website: www.staceyrathert.com